In this post, I will show how PCA can be used in reverse to quantitatively identify correlated time series. We will compare this with a more visually appealing correlation heatmap to validate the approach.

This approach is inspired by this paper, which shows that the often overlooked ‘smaller’ principal components representing a smaller proportion of the data variance may actually hold useful insights.

The authors suggest that the principal components may be broadly divided into three classes:

Now, the second class of components is interesting when we want to look for correlations between certain members of the dataset. For example, considering which stock prices or indicies are correlated with each other over time. This is the application which we will use the technique.

First, some data. Three real sets of data were used, specifically. Daily closing prices for the past 10 years of:

These files are in CSV format. They are imported as data frames, and then transposed to ensure that the shape is: dates (rows) x stock or index name (columns).

Pandas dataframes have great support for manipulating date-time data types. However the dates for our data are in the form “X20010103”, this date is 03.01.2001. So a dateconv function was defined to parse the dates into the correct type.

This was then applied to the three data frames, representing the daily indexes of countries, sectors and stocks repsectively.

This is done because the date ranges of the three tables are different, and there is missing data. For example the price for a particular day may be available for the sector and country index, but not for the stock index. Ensuring pandas interprets these rows as dates will make it easier to join the tables later.

As the stocks data are actually market caps and the countries and sector data are indicies. We need a way to compare these as relative rather than absolute values. The market cap data is also unlikely to be stationary - and so the trends would skew our analysis.

So, instead, we can calculate the log return at time t, defined as:

Now, we join together stock, country and sector data. As not all the stocks have records over the duration of the sector and region indicies, we need to only consider the period covered by the stocks. To do this, create a left join on the tables: stocks<-sectors<-countries.

So the dimensions of the three tables, and the subsequent combined table is as follows:

Now, finally we can plot the log returns of the combined data over the time range where the data is complete: 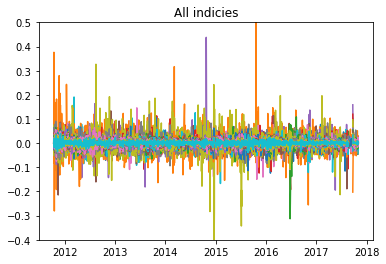 It is important to check that our returns data does not contain any trends or seasonal effects. There are a number of ways we can check for this

The adfuller method can be used from the statsmodels library, and run on one of the columns of the data, (where 1 column represents the log returns of a stock or index over the time period). In this case we obtain a value of -21, indicating we can reject the null hypothysis.

2. Inspection of the distribution

We can also plot the distribution of the returns for a selected series. If this distribution is approximately Gaussian then the data is likely to be stationary. Below, three randomly selected returns series are plotted - the results look fairly Gaussian. 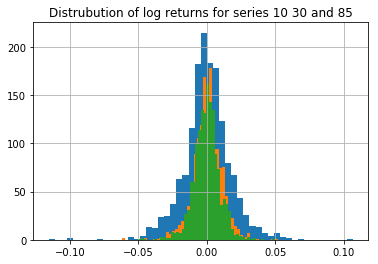 Before doing this, the data is standardised and centered, by subtracting the mean and dividing by the standard deviation.

Using Plotly, we can then plot this correlation matrix as an interactive heatmap: We can see some correlations between stocks and sectors from this plot when we zoom in and inspect the values. Some noticable hotspots from first glance:

First, we decompose the covariance matrix into the corresponding eignvalues and eigenvectors and plot these as a heatmap. 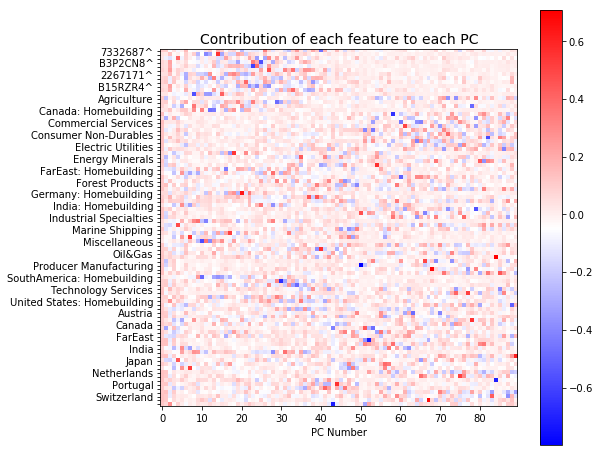 This plot shows the contribution of each index or stock to each principal component. There are 90 components all together. We can see that the early components (0-40) mainly describe the variation across all the stocks (red spots in top left corner). It also appears that the variation represented by the later components is more distributed.

The total variability in the system is now represented by the 90 components, (as opposed to the 1520 dimensions, representing the time steps, in the original dataset). The eigenvalues can be used to describe how much variance is explained by each component, (i.e. how the varaiance is distributed across our PC’s).

Below we plot this distribution: As we can see, most of the variance is concentrated in the top 1-3 components. These components capture “market wide” effects that impact all members of the dataset.

Following the approach described in the paper by Yang and Rea, we will now inpsect the last few components to try and identify correlated pairs of the dataset

We can plot these loadings together to better interpret the direction and magnitude of the correlation. The loadings for any pair of principal components can be considered, this is shown for components 86 and 87 below: For example, stock 6900212^ correlates with the Japan homebuilding market, as they exist in opposite quadrants, (2 and 4 respectively). This is consistent with the bright spots shown in the original correlation matrix.

Using the loadings plots to identify and rank correlated stocks

We can use the loadings plot to quantify and rank the stocks in terms of the influence of the sectors or countries.

To do this, we categorise each of the 90 points on the loading plot into one of the four quadrants. Then, we look for pairs of points in opposite quadrants, (for example quadrant 1 vs 3, and quadrant 2 vs 4). Then, if one of these pairs of points represents a stock, we go back to the original dataset and cross plot the log returns of that stock and the associated market/sector index.

Using the cross plot, the value is calculated and a linear line of best fit added using the linregress function from the stats library. A cutoff value of 0.6 is then used to determine if the relationship is significant.

Cross plots for three of the most strongly correlated stocks identified from the loading plot, are shown below: 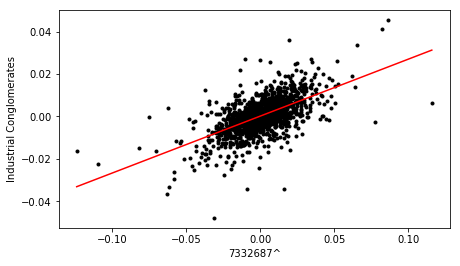 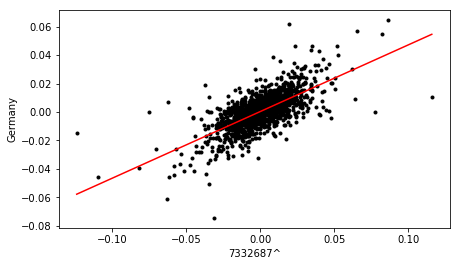 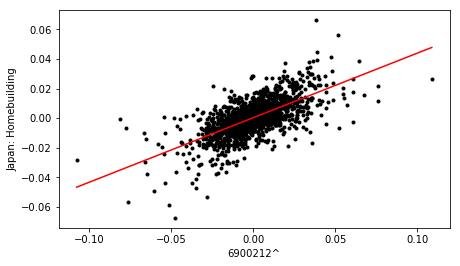 Finally, the dataframe containing correlation metrics for all pairs is sorted in terms descending order of value, to yield a ranked list of stocks, in terms of sector and country influence. 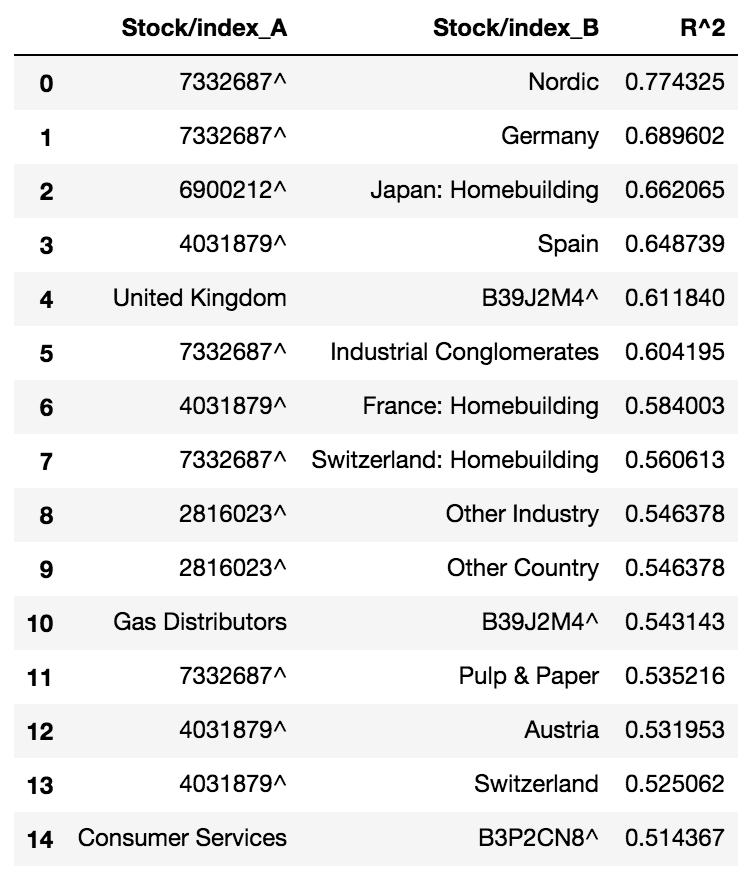 The top correlations listed in the above table are consistent with the results of the correlation heatmap produced earlier.

This analysis of the loadings plot, derived from the analysis of the last few principal components, provides a more quantitative method of ranking correlated stocks, without having to inspect each time series manually, or rely on a qualitative heatmap of overall correlations. It would be cool to apply this analysis in a ‘sliding window’ approach to evaluate correlations within different time horizons.

Hope you found it interesting!

You can find the full code for this project here